Commodore Madani Senghore was born on the 16th March 1968 to a Muslim family in Banjul.

He enrolled at Windley Primary School from 1974 to 1980 and then he proceeded to Crab Island Secondary Technical School where he obtained a secondary 4th school leaving certificate in 1984. Relentless in his quest for knowledge, the Commodore enrolled at the prestigious Gambia High School from 1984 to 1987 and obtained a GCE O – level certificate.

Commodore Senghore enlisted into the Gambia Armed Forces on the 10th February 1988 and was posted to the Gambia Navy as a sailor. The Officer was privileged to attend the HMS Sultan Royal Naval School of Marine Engineering in the United Kingdom which led him to become a highly seasoned specialist on Naval Engineering. The Officer was promoted to officer cadet in January 1995 after he passed the Cadet Selection Board and in September 1995, Commodore Senghore joined the club of the few and privileged of the Gambia Armed Forces known as the Officer Corps with his commissioning to the rank of Midshipman a naval rank equivalent to Second Lieutenant in the Army.

In preparation for senior military responsibilities, he went back to the military college in the Republic of Nigeria Armed Forces Command and Staff College, from January 2005 to  June 2005.

He is also decorated with Le Jola Medal in recognition of his participation in the rescue operation of the Senegalese passenger ship Le Jola in Gambian waters. Furthermore, the Commodore is decorated with a General Service Medal. 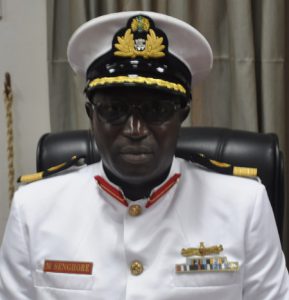 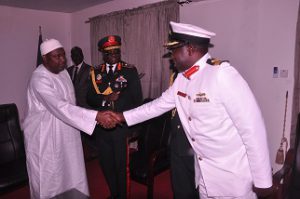