The Farafenni Army Barracks also known as the Second Infantry Battalion is located in the cosmopolitan town of Farrafenni. The history of the barracks could be traced as far back as the late 50 to a construction company called Whimpy that was based at the barracks during the 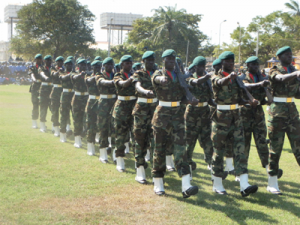 In the late 70s the area was earmarked as a depot for the Pioneering Unit (PU) of the then Gambia Field Force. The first troops were deployed in 1976 and construction work for additional structures was undertaken in the same year. The PU remained in existence until the birth of the Gambia National Army (GNA) in 1984. It was then renamed the Engineering Squadron of GNA after its official inauguration in 1984.

The first infantry company of the battalion was deployed in Farrafenni Camp in 1988 when the then Saloum Hotel was handed over to the GNA and the unit was charged with its security. The reorganization of GNA by the Nigerian  Army Training Assistance Group (NATAG) in March 1992 witnesses the birth of 2 infantry Battalion on the 20 August 1992.

Presently, 2 Infantry Battalion has undergone a tremendous growth with  several sub-units under its command.