Lieutenant General Yakuba A Drammeh (psc) was born on 29 August 1963 in Bwiam, Foni Kansala District, Republic of The Gambia. 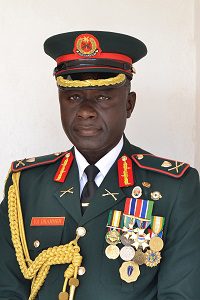 His distinguished military career began in August 1985. During the period under review, Lt Gen Drammeh held various regimental command positions and staff appointments at all levels (both at home and overseas), including outstanding tours of duty in peacekeeping operations (PKO) under the auspices of the United Nations (UN), the African Union(AU) and the Economic Community of West African States (ECOWAS).

In addition, the General Officer had attended various local and overseas command and staff military training/courses in the United States, United Kingdom, Nigeria and Pakistan, amongst others. He is a graduate of the Nigerian Armed Forces Command and Staff College.

The General Officer is a proud recipient of several awards and decorations. These include Good Conduct Medal, Long Service Medal, Distinguished Service Medal,UNAMSIL Medal,United Nations Mission in Liberia (UNMIL) Medal, UNAMID Medal, ECOWAS Monitoring Group (ECOMOG) Medal, Passed Staff Course (with merit) and Order of the Republic of The Gambia, among others.

During his tenure with ECOMIL and AMIS peacekeeping operations, the General Officer chaired numerous FHQ disciplinary boards of inquiry (BOI), which he handled with consummate professionalism and integrity. His analytical approach, critical and well balanced assessment of the situations at the time, coupled with timely submission of the Board’s findings and recommendations had earned him unreserved respect and admiration by his superiors and juniors alike.

Lt Gen Drammeh is an accomplished diplomat. His diplomatic career began in April 2010, when he was deployed to the diplomatic/foreign service following an initial 25 years of distinguished military career. As a diplomat, he first served in the capacity of Deputy Head of Mission at the Embassy of the Republic of The Gambia to the Republic of Turkey from May 2010 – April 2012. Maj Gen Drammeh was later posted to The Permanent Mission of the Republic of The Gambia to the United Nations and appointed Deputy Permanent Representative. He served with distinction in that capacity for the period April 2012 – May 2015.

Given the multi-faceted, intriguing, and challenging nature of multilateral diplomacy, Maj Gen Drammeh had the exceptional privilege to have presided over and/or engaged in constructive and purposeful dialogue, negotiation and consensus building on complex and contentious issues ranging from human rights domains, climate change, global terrorism, disarmament, working groups on the Post 2015 Development Agenda and peacekeeping operations respectively, amongst others.

Lt Gen Yakuba A Drammeh was recalled to home duty in May 2015 following the successful completion of his tour of duty with the Permanent Mission of the Republic of The Gambia to the United Nations. Accordingly, he was reinstated in the Gambia Armed Forces in June 2015 and reappointed Deputy Chief of Defence Staff (DCDS); the appointment he still holds.