THE GAMBIA ARMED FORCES DEPARTMENT OF COMMUNICATIONS AND INFORMATION TECHNOLOGY

Military communications are activities, equipment, techniques, and tactics used by the military in some of the most hostile areas of the earth and in challenging environments such as battlefields, on land, underwater and also in the air. In the military set up, it is a field that must be mastered by all radio and computer users irrespective of cap badge or rank. Those specialized in this field are called “Signalers”.

The advent of unique signals led to the formation of the Signal corps, a group specialized in the tactics of military communications. The Signal corps evolved into a distinctive outfit where signals became a highly technical job dealing with all available communication methods. The earliest forms Communications in the battle field were the use of horns, whistles, runners, flares, hand and arm signals.

Present-day military forces of an informational society conduct intense and complicated communicating activities on daily basis, using modern Telecommunications and computing methods. Improved network operations and surveillance mechanism have simplified command and control for commanders and enhance the ability to share a broad view of the battlefield thereby reducing the time required for analysis and decision making in combat operations.   No Military operation or campaign was ever successful in the absence of effective communication with all elements of the force.

“Think like a wise man but communicate in the language of the people” (William Butler Yeats).

However, The Gambia Armed Forces signal corps may not be sophisticated like that of advanced Armies, but has a very well trained, competent and committed signal unit which domestically operates under two main units of IT and Radio Communications. 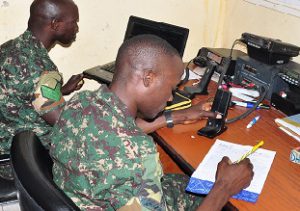 The Department is tasked with the responsibility to efficiently and securely transmit information through voice and data from one unit to another within and outside the Armed Forces. It is among the first units to action, by establishing communications and information systems essential to all operations. The directorate provides Communications equipment and infrastructure for the Armed Forces wherever they operate in the world.