Brigadier General Mamat OA Cham is the Commander Gambia National Army (GNA). The Service Chief is responsible for the day-to-day Operation, Command & Control and Administration of the GNA . He was enlisted into the Gambia Armed Forces (GAF) on 16 July 1984 and held the following positions: 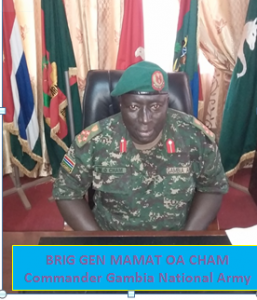 He was discharged from the GAF on Aug 1994 shortly after AFPRC Military Junta took over power back in July 1994.

A highly professional and motivated National Army that is adequately equip to execute its national security role, contributing meaningfully to national development and at the same time participate effectively in the maintenance of regional and global peace stability.

General Cham obtained  GCE O Level and GCE A level  in 1980 and 1983 respectively. He graduated from the Lack Land Air Force Base, San-Antonio, Texas, USA and obtained a diploma in Specialized English in 1985. He  further obtained a BSc degree in Economics and Management from the University of the Gambia in 2007. In 2015 he was certified a Diploma in Basic IT at the Lasting Solution Institute.

The General Officers  is married with children and speaks English and French. His hobbies are Reading, sports, farming, traveling and networking with family and friends.