Brief On The Gambia Navy

The Primary roles of the Gambia Navy is to Preserve the Sovereignty and Defend Territorial Intergrity of the Gambia. like the other Services, these roles are categorized into Military, Humanitarian and Socio-economic/ Developmental.

The guiding principles for the defence of a nations sovereignty are deliberately determined by political, economic and strategic reasons, all of which are ultimately geared towards safeguarding the national interest, territorial integrity and national survival. This is then followed by the decision of what sort of armed forces is required for the nation. The composition of a nations armed forces is eventually determined by the geographical nature of the country. This is why most land-locked countries are without a navy. Does the Gambia need a navy? The answer is an empathic yes. Looking soldely at the map of the country one may wonder why it is shaped the way it is today. Some people would say that it is the legacy of colonialism. Whatever the reason is. It is interesting to observe the fine meandering waterway called the River Gambia, connecting the mighty Atlantic Ocean and flowing right through the country with the narrow strips of land on the north and south of its blanks to constitute the interior of the country. It is also worthwhile to note that thee River Gambia is not the only river that empties into the mighty Atlantic Ocean. There are other from other parts of the continents interior such as river Senegal, River Saloum, and river Casammance.

The River Gambia, however, has unique advantage over the other rivers; it is navigable up to 150 nautical miles inland for vessels weighing up to 3000 tons. This advantage of accessibility has facilitated trade in the interior and the control of this strategic trade route was undoubtedly the basis of a lot of contention between various European countries during the colonial era. Our physical topography, no doubt indicates that the waters of the River Gambia afford enormous potentials in terms of economic and social advancement as well as in the eras of national defence capabilities.

Within the inland waters, the entire length of the country is divided by the River Gambia into the north and south banks. It has many belonging and creeks such as the Bitang, Sofanyama, Miniyang, Bao, and Sandu just to name a few. These clear physical patterns of the River Gambia and the numerous tributaries and distributaries make all parts of our country relatively accessible with the appropriate watercraft.

Our territorial waters extend up to 12 nautical miles offshore and this comprise the most important part of our waters as far as our seaward defence, economy and vital artisanal fisheries resources are concerned. It borders our golden beaches which are vital for our tourist industry and eco tourism and also serves as the breeding ground for fishes as well as the fishing ground for our artisanal fishing communities.

Considering the maritime economic zone which extends seaward up to 200NM, we are a littoral state. Our maritime environment provides a medium for 90% of our external trading activity. The organic and inorganic resources obtained for the maritime environment contribute quite substantially to our socio-economic well-being. Classic examples of such economic benefits are fishing and a high prospect of exploration of hydrocarbon in our seabed just to mention a few. 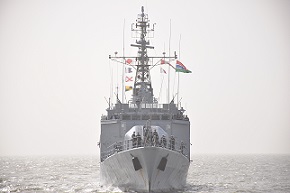 Our maritime area consist of the Exclusive Economic Zone and the River Gambia catchments area which together is about 17000sqkm (km exceeds our total landmass of 11,300sqkm). This is the area on which the Gambia Navy is expected to exercise a credible presence. The benefits of our maritime environment to the social and economic well-being of our people are undoubtedly enormous and threats to them are very evident. The prosperity of the vital social and economic activities in our maritime environment, for the present as well as for the future will require stability and security in our entire maritime environment. Therefore, it is in our best national interest to secure our national waters. The Gambia’s maritime interest shall henceforth include the defence of our national waters, the prevision of a safe commercial shipping environment, ensuring the judicious utilization of our seabed natural resources, fishing, military and other scientific uses. To be able to police this vast area and exploit its resources profitably, there is the need for a well equipped and highly trained naval force that can meet the possible security challenges of safeguarding the interest of the country and respond to threats against national security.

Taking cognizance of all the highlighted points, the Gambia’s physical environment have given the navy indisputable defence potential thus making the role of navy an enormous undertaking. 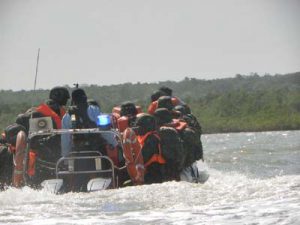 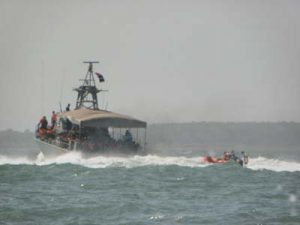 Gambia Navy Marines on an exercise